Jim Luke has been performing for over thirty years, in Florida and Texas since 1980. He has been a bandleader in Houston and Austin, fronting the original Midnight Flyer Band in Houston, the JumpCats, and most recently, the Juke Jammers, an Austin, Texas blues band. He also recorded and performed with Big Walter The Thunderbird, and Joe (Guitar) Hughes of Houston, Texas. 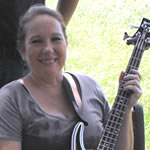 Originally from St. Louis, Mary’s musical journey with cello and stand-up bass stopped after high school until she took up the electric bass to make music that makes people dance and smile.

Dan Arceniega, comes to us from California. A long-time bass player and amplifier wizard, Dan loves blues and Fender guitars.

Tony is a a pro with many years of playing to his credit.